As the new opener of the NRL season, the impending Auckland Nines not only provides fans their first taste of the Rugby League action they’ve been craving all summer, but also the first in the vast array of jerseys that clubs will be peddling to you this year.

In 2014, the jerseys ranged from what the hell is that? To umm, what team is that? To well that one is OK I guess.

Between the likes of women in league round, adopt a small Ethiopian child round, heritage round, whore out the front of your jersey to promote a billion dollar film round, weird alternate jersey cash grab round, close the gap round, and embrace alcohol round (just joking, that’s every round), the Nines jersey will be one of roughly 17 jerseys that you’ll have to justify to your significant other this season to be a good consumer truly dedicated fan.

But with the exorbitant price of jerseys, we’d like our Nines investment to not look like something that has sat in the back of your closet after a trip to Bali 15 years ago. So I’ve gone ahead and taken a look at all 17 Nines jerseys this year, and so I present the 2015 NRL Nines fashion rankings.

Actually, noob, the Tigers have taken it upon themselves to have two jerseys for the Nines this year, which was probably necessary because their primary colour is orange which is a popular colour

amongst NRL teams, we wouldn’t want a clash between two teams wearing orange now would we?

But my fault with the Tigers isn’t that they wear orange, and the blatant cash grab only enhances my primary issue, which is that these aren’t even bloody jerseys, they’re singlets. Spare me your “sleeveless jersey” retorts, they’re singlets.

It’ll be hot, I get that, but it’s a slippery slope from here to running around bouncing the ball on the ground every few steps and having names like the Swans.

Speaking of how crap AFL is, here comes Melbourne at 15.

But over the years, we’ve regressed from the once awesome League jersey, to the love-handle hugging, no collar having, skin tight jersey that may make the ladies, or men if you’re that way inclined, swoon over SBW (insert new heartthrob who isn’t shifting to Union here). This is the next step in the devolution of the NRL jersey.

They’ll probably sell a crap load of these things however, so expect more teams on the bandwagon next year citing the benefits on the players.

The Bulldogs could have went down to the local primary school, told the kids they have five minutes to Photoshop up a Bulldogs Nines jersey with one hand tied behind their back and several of them would have produced something more inspiring than this one.

Hot off the trails of their sterling effort last year, I imagine the discussion around the creation of this jersey went something along the lines of

Designer 1 – Well, we’re the Bulldogs right? So I say we put a big Bulldog on the front of the jersey.

Designer 3 – And the dog should be blue!

And then they opened up Microsoft Paint, googled a picture of a bulldog, stuck it in Paint and smeared some blue over it.

Ever met the guy who claims he’s awesome at Photoshop, because it’s cool to be good with Photoshop, and then he produces some really crap attempt at sticking someone’s head onto another person’s body and it looks terrible? That guy has a 10 GB folder of awesome jersey mock-ups like this one.

If there’s one thing better than having two dragons on your jersey, it’s having three dragons.

It isn’t so great however when the biggest dragon looks like something from a paint by numbers kit that only came with the colour grey, so you just painted the whole thing grey. The big dragon should be some fantastic, intimidating creature, but it belittles the big dragon when there’s then the little green dragon next to it devoid of anything from the neck down just sitting there like chill bro, Puff the Magic Dragon up in here. 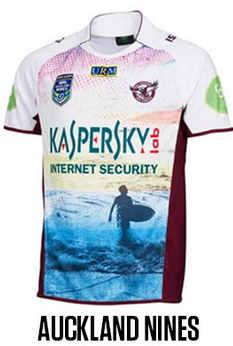 Unnamed friend – Oh you went to the Kasperky Surfing tournament?

Unnamed friend – Oh, why are you wearing a Kaspersky Surfing tournament shirt?

And then after going through the same conversation five times you wear your jumper the rest of the day even though it’s 32 degrees until you can get home and retire the shirt at the bottom of your drawer. This is one of those shirts.

I like my jerseys simple, but there’s a difference between a tidy, simple jersey design, and the nothingness that is the Cowboys effort. Unless the lines on the front are designed to place would be tacklers into some sort of hypnotic trance, I have no idea what they are going for here.

It is as if the criteria was we’d like a jersey in white, with lots of lines on it, and that’s exactly what they got.

The jersey has none of the Cowboys yellow trim beyond the advertising on the sleeves, had they implemented more of that, then it would be a little more appealing. Again, I like it simple, give me your team colours tidily presented and I’ll be happy.

It isn’t the hideous sight that some of the other offerings are, but it’s certainly the most boring.

I’m unsure whether digging up the corpse of Ken Nagas is a damning reflection of the Raiders lack of talent, or an indication of their lack of regard for this tournament, but one of the few things the Raiders will do right this year is keeping their jersey green.

That’s all I want from the team known as the “Green Machine”, wear a green jersey.

I could do without the white sleeves, and they probably wasted a bunch of money paying somebody to design the patterns on the jersey that ultimately nobody will care about, but it’s green. You did something right Canberra.

I see what they’re trying to do here, and while I’m not too keen on most gimmicky jerseys, I can see how this one sounds appealing in theory.

However, in practice it isn’t quite the shining set of armour they perhaps envisioned, an adequate reflection of the Knights recent efforts then at least.

Still, as far as gimmicky jerseys go, if they can strike a better balance between a jersey and actually sending their team out there in a full set of armour, then they could be onto something.

The only top eight the Sharks will be making this season.

That said, there’s something about it that makes me not dislike it, even if I have no idea what it’s meant to be. At least they’ve got their colours in there, and it is a nice, cool colour pallet. 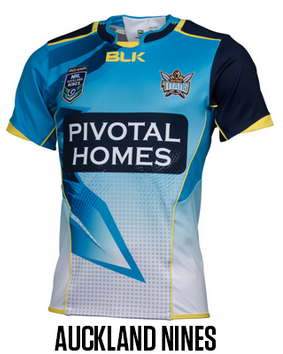 On the topic of nice colour pallets, the Titans have an interesting one to work with also.

The blue in their jersey is striking, however they could have utilised more of their yellow.

They’ve tried to do something interesting with what looks like a tip of a blade on the front of a jersey, but they could have embraced that further.

But it isn’t an eyesore, even if that’s only by virtue of having a nice shade of blue to work with. Still, that’s enough to get you pretty far up this list.

Something about the Eels yellow always reminds me of the wrapper of a block of butter. Almost like they invented some new butter that has blue dots in it because some exec had the bright idea that if butter was full of blue dots it would make it “fun” and you could market butter to kids as “fun” and get them into the kitchen baking but then the parents realise the blue is made of some food colouring crap and they don’t let little George eat such things so the product flops entirely.

Parramatta just flows as a great name for a butter company, Parramatta Butter. If your jersey reminds me of butter, then for better or worse it’s a winner in my book.

As I’ve mentioned, I’m not fond of most of the gimmicky jerseys, but the Eels strike a decent balance between staying true to their team’s identity, while making things a little more fun for the carnival type atmosphere. 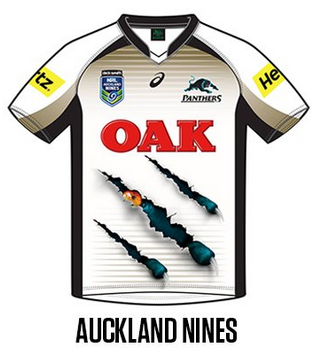 Proof that you can have a fun, gimmick jersey, while still maintaing a simplistic approach rather than looking like the product of an art school dropout.

The Panthers have a relatively “normal” jersey here, with the claw marks to add some flavour, and the eye behind the scratches gives it an extra little edge.

The claw marks are a simple, effective way to further convey who they are. It’s a touch of edge, a touch of physicality, these aren’t your typical housecats.

If you don’t already know me, I hate the Broncos. I’ll take every opportunity I can to take a shot at the Broncos.

But it’s hard to slight them for the sleek design here, if anything the extra gold trim makes the Nines jersey more striking than their regular home one.

One of the perks of being sponsored by Nike must be that when you’re sitting there with a stupid picture of a cartoon donkey on your concept jersey designs, they send somebody in who dictates they can’t be associated with something that looks so bad and ensures you get something that looks legit.

I hope they lose every game.

As much as I appreciate teams sticking to their traditional colours and designs, there’s no denying that the Warriors jersey is certainly a sight to behold.

To be fair, you’d be forgiven for forgetting what the Warriors traditional colours are anyway given they wear such drastically different jerseys so often, and no doubt there’ll be many of these ones packed into Mt Smart this year lost in the jersey shuffle.

The designs on the jersey itself ensure that they maintain representing the New Zealand culture, plus it has Woodstock on the sleeve and I love Woodstock’s.

It was no doubt very tempting for those creating the Roosters jersey to just draw a strapping young cockerel on the front, but common sense prevailed and the tricolours have gone with a traditional striped jersey approach featuring their customary blue red and white colour scheme.

Maybe I’m a bit of a Debbie Downer, but I can dig that. Even though it’s the nine man version of the game, these blokes are still going out there playing Rugby League, and the Chooks outfit looks like a Rugby League jersey. It’s definitely a far cry from the “sleeveless jersey” offerings.

Score one for history and tradition.

“Really, that boring one?” you may ask, or perhaps “f*%@ng Souffs mate?” both equally valid questions, but yes, the Rabbitohs come in at number one.

The Rabbitohs green and red stripes are an easily identifiable colour scheme, whether you love them or hate them, if you see that on a League jersey, you know it’s the Bunnies and they’ve stuck with that.

But they didn’t just load up the stripes and be done with it, the Rabbitohs jersey features a Maori koru design, which creates an interesting blend between the Rabbitohs traditional style stripes jersey and paying homage to the culture of the host nation. The result is an attractive, Rugby League looking jersey, which still allows for some creativity in the spirit of the occasion.

Sports fanatic, finished my post graduate studies and in the after University wilderness, now writing for http://t.co/GeiskXTgoY

VIDEO: THE TOP 5 IMPORTS WHO WILL TAKE SUPER LEAGUE BY STORM IN 2015